Now the long winter nights are here, I wanted to have another bash at MW DXing. I have already built one or two MW loops, but in the early mornings I like to sit up in bed with my Tecsun PL660 and a cup of tea, and DXing whilst trying to balance one of these is not very easy.

I have had my eye on a commercial product from the USA, but with postage to the UK, the Royal Mail handling fee and our 20% VAT it came to over GBP80.00 which is way more than I wanted to spend, so I decided to have a go at building one myself.

An amateur radio pal of mine had given my a Sony Tuner a few years ago, and when I no longer had need of it, I removed the excellent 7.5" AM ferrite rod and stuck it in my junk box. What I was unsure about was how many turn of wire to wrap around it. The closest answer I could find on the net was to start with around 50 turns, but as it happens it took around 80 turns to get to the MW band (the max number of turns I could wind without going back over myself), and a further 30-40 (which I wound back over the existing windings) to tune all the way down to 531khz.

I housed it in a nice cardboard tube and tuned it with a small AM capacitor, removed from a broken AM radio. So far the cost: zero pounds! In fact the most expensive part was the printing charge at the library of 10p for the design label I made on Word. So the grand total was 10pence!

It works like a dream. and being so small and portable is perfect for taking away on holiday, carrying out to the end of the garden, or sitting up in bed in the small hours.

The Tecsun PL660 is quite sensitive on MW and selectivity is not too bad if you keep the gain at the "normal" setting at night. Perhaps it is not quite as sensitive as my old Sony 7600GR, but I never liked that radio much for reasons I mentioned in a previous post (mostly its poor battery meter and poor audio when compared to the far superior and punchy audio of the 660). And when coupled to a small loop like the Tecsun AN200, a small homemade loop, and now also my homemade MW Super Stick, it is a ferocious contender! I couldn't be more pleased with it. Last night, when CRI from Urumqi on 1521 khz came through the co-channel interference with their familiar Chinese ID of the folk tune "Jasmine" and Chinese "zhonguo guangbo diantai" (China International Radio Station) followed in Russian by the ID "radio kitaja", it was hard to describe the excitement of knowing it was being pulled out of the ether by something I myself had made. It is indescribably more enjoyable than using a commercial product. And with the money I have saved I have treated myself to a Sony SW-35, which is going to replace my Tecsun PL310. I will write a  review on the SW-35 in the not too distant future.

Below is a photo of the insides of the Super Stick, and later I shall add a link to a youtube video demonstrating its effectiveness and also I will post another photo. 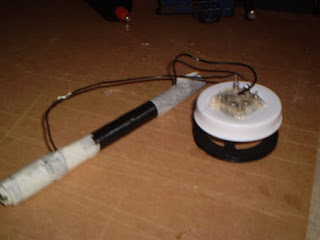 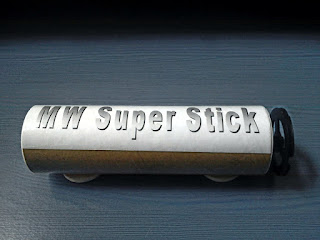 And as promised, the Super Stick photo on the right. And if you click here you will be taken to my YouTube video demonstration.

As I said previously, I have a small 30cm diameter homemade air-spaced loop (where the wire is wound around a loop rather than a ferrite rod). I built it to cover both the MW broadcast band and the MF Marine Band, and so it tunes from 540khz up to around 2.8mhz. During the daytime, distant MW broadcast signals are a little better on the larger air-spaced loop when compared to the MW Super Stick. At night the difference is less noticeable. But having tinkered around with the two loops for a long time I think it would be fair to say I don't think there is anything that the larger loop can pick up that I haven't also heard on the Super Stick. And the Super Stick has all the benefits of neatness, convenience, and portability.

I have also experimented with using the Super Stick behind the PL660 to bring in the required station, and then using a second loop behind that again, and positioning it in such a way as to null out either interference from stations on the same channel (not much luck with this during the nighttime, but moreso during the day) and, more successfully, local niose. This technique is called phasing, and it is like magic when you introduce the second loop and watch the local noise completely disappear.

To end this article, I have included a photo of my homemade air-spaced loop: 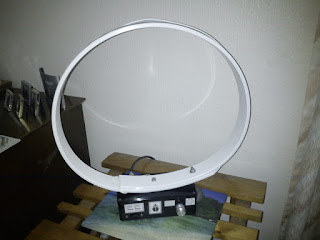 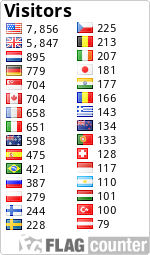